What Are the Surgical Options?

There are several types of restrictive and malabsorptive operations. Each one carries its own benefits and risks.

Restrictive operations serve only to restrict food intake and do not interfere with the normal digestive process. To perform the surgery, doctors create a small pouch at the top of the stomach where food enters from the esophagus. Initially, the pouch holds about 1 ounce of food and later expands to 2-3 ounces. The lower outlet of the pouch usually has a diameter of only about 3/4 inch. This small outlet delays the emptying of food from the pouch and causes a feeling of fullness.

As a result of this surgery, most people lose the ability to eat large amounts of food at one time. After an operation, the person usually can eat only 3/4 to 1 cup of food without discomfort or nausea. Also, food has to be well chewed.

The Sleeve Gastrectomy is considered a restrictive and metabolic procedure. Performed laparoscopically, two-thirds of the stomach is cut away and removed, leaving a narrow, banana-shaped stomach. The new smaller stomach provides restriction and aids in portion control. The portion of the stomach removed releases a hormone called ghrelin, which is an appetite stimulant. By removing that part of the stomach, there is less ghrelin production. In addition, the portion removed is very distensible-it can stretch very easily and may also contribute to our ability to eat large portions.

The sleeve gastrectomy is not reversible, but with time and if a person frequently overeats, they may stretch their sleeve resulting in less restriction. It will never stretch back to the original size, but may stretch enough to lose your restrictive control.

Although the sleeve gastrectomy is a newer procedure, it has been performed for many decades in combination with the biliopancreatic diversion (BPD). The BPD is a malabsorptive operation where most of the intestine is bypassed. The weight loss is dependent on not absorbing the food eaten and may result in severe nutritional deficiencies. This operation is often reserved for people who need to lose several hundreds of pounds, but these are also the same people who are very high risk for complications because of their larger BMIs. In order to minimize the complication rates, the biliopancreatic diversion was done in stages. The first stage was the sleeve gastrectomy. After the patient lost one hundred pounds, they then went onto the second stage which was most often the biliopancreatic diversion or less frequently, the gastric bypass. What was discovered was that several patients lost a significant amount of weight with the sleeve gastrectomy alone, and did not need to have the second stage of the surgery performed. That is how we have come to do the sleeve gastrectomy by itself. For those patients that do not lose enough weight with the sleeve alone, it would still be possible to perform the gastric bypass (which provides enough malabsorption without excessive malnutrion).

Weight loss with sleeve is gradual, but still at a faster rate than with the adjustable gastric band. Expected excess weight loss is about 60 % at 1 year. Although 5-year data supporting the sleeve is good, the long term data is not yet available.

Risks and Complications of Sleeve Gastrectomy

Any operative procedure can cause complications. In general the morbidly obese population is at higher risk for worse outcomes with any complication. Thus we go to great measures to provide you with a complete work up before surgery to minimize these risks. Additionally, you should be reassured that programs such as ours with "Center of Excellence" designation are in general considered safer because of much higher standards to which we adhere.

Sleeve Gastrectomy is a major abdominal operation. Tens of small "complications" may occur that are NOT life threatening and thus we will not discuss. Occasionally your new stomach may become too tight, usually in the early period after surgery. This is usually transient and will resolve spontaneously with some rest time. More severe cases that usually occur later are rare and occasionally may require dilation with an endoscope. It is very rare that surgical intervention is required for this type of complication.

After sleeve Gastrectomy some patients BUT NOT very commonly, may develop severe heartburn that is not controllable with medication. In severe cases surgical intervention may be necessary to correct this problem.

The biggest complication that may occur after sleeve Gastrectomy is a leak. We take great measures to prevent leaks but in rare instances it may occur. It will require surgical intervention most often and if it is untreated it can be life threatening. Fortunately it is very rare. 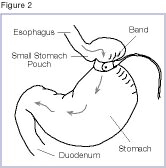 The laparoscopic adjustable gastric band is a purely restrictive procedure. It involves placing a silastic (plastic) band around the top portion of the stomach so that the stomach acts as if it has been reduced in size. After eating a small amount of food, this smaller stomach becomes distended and the patient feels full. Also, the food passes slower into the remainder of the stomach so that fullness last longer than before surgery. The goal is portion control. The band "tightness" around the stomach is adjustable by adding or removing fluid from a balloon on the inside of the band. This is done utilizing a "port" that is connected to the balloon. The port lies on the abdominal wall, under the skin. The adjustments are performed in the bariatric office, and do not require another operation to perform. No part of the stomach or intestines are cut or divided in order to place the band.

Risks and complications of the Adjustable Gastric Band

As mentioned above, no surgery is without risk. Major risks associated with the band can include infection, bleeding, erosion of the band into the stomach, or slippage of the band on the stomach. Both require a reoperation to fix the problem. In addition, there is a risk of deep vein thrombosis or pulmonary embolus. There may also be minor risks such as leakage at the port site; which can often be taken care of with a minor surgery. Vitamin and protein deficiencies can occur if the diet is not well balanced. If the band is removed for whatever reason, there is a high chance the patient will regain all the weight loss as the restrictive mechanism is now gone. 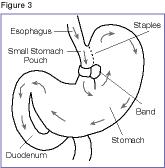 VBG has been the most common restrictive operation for weight control. As figure 3 illustrates, both a band and staples are used to create a small stomach pouch.

Although restrictive operations lead to weight loss in almost all patients, they are less successful than malabsorptive operations in achieving substantial, long-term weight loss. About 30 percent of those who undergo VBG achieve normal weight, and about 80 percent achieve some degree of weight loss. Some patients regain weight. Others are unable to adjust their eating habits and fail to lose the desired weight. Successful results depend on the patient's willingness to adopt a long-term plan of healthy eating and regular physical activity.

A common risk of restrictive operations is vomiting, which is caused when the small stomach is overly stretched by food particles that have not been chewed well. Band slippage, erosion, and saline leakage have been reported after AGB. Risks of VBG include wearing away of the band and breakdown of the staple line. In a small number of cases, stomach juices may leak into the abdomen, requiring an emergency operation. In less than 1 percent of all cases, infection or death from complications may occur.

Malabsorptive operations are the most common gastrointestinal surgeries for weight loss. They restrict both food intake and the amount of calories and nutrients the body absorbs. 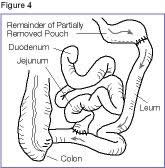 In this more complicated malabsorptive operation, portions of the stomach are removed (see figure 4). The small pouch that remains is connected directly to the final segment of the small intestine, completely bypassing the duodenum and the jejunum. Although this procedure successfully promotes weight loss, it is less frequently used than other types of surgery because of the high risk for nutritional deficiencies. A variation of BPD includes a "duodenal switch" (see figure 5), which leaves a larger portion of the stomach intact, including the pyloric valve that regulates the release of stomach contents into the small intestine. It also keeps a small part of the duodenum in the digestive pathway. 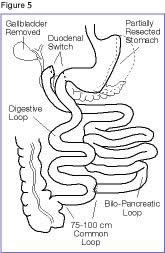 In addition to the risks of restrictive surgeries, malabsorptive operations also carry greater risk for nutritional deficiencies. This is because the procedure causes food to bypass the duodenum and jejunum, where most iron and calcium are absorbed. Menstruating women may develop anemia because not enough vitamin B12 and iron are absorbed. Decreased absorption of calcium may also bring on osteoporosis and metabolic bone disease. Patients are required to take nutritional supplements that usually prevent these deficiencies. Patients who have the biliopancreatic diversion surgery must also take fat-soluble (dissolved by fat) vitamins A, D, E, and K supplements. 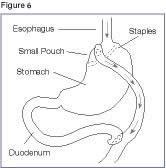 The Roux-en Y gastric bypass is a combined RESTRICTIVE and MALABSORPTIVE procedure. The restriction in this operation is accomplished either by forming a smaller functional stomach with staples ("short limb"), or taking out about 66% of the stomach. In either case, the remaining portion of the stomach is at about 1-4 ounces in size. The size of this new stomach will start out at about the size of a golf ball (short limb Roux Y gastric bypass), or small juice glass (long limb Roux Y gastric bypass). Expect some increase in size as time goes by. We do not put any bands or rings (foreign materials) around the stomach to make it empty more slowly.

In review, following gastric bypass surgery, when you eat food, it will go into the smaller stomach (gastric pouch). The food then enters the route of intestine referred to as the "Roux limb." (The Roux limb is also called the "alimentary limb" because it carries the food). The portion of bowel that is not carrying food (biliopancreatic limb) carries bile and digestive juices from the liver and pancreas. Full digestion will take place in the "common channel" where the digestive juice and bile mix with food. "Short" versus "long" limb gastric bypasses refer to the length of the bypassed bowel, with the long limb bypassing a greater length of bowel, and thus providing more malabsorption.

Risks and Complications of Gastric Bypass

There are major risks and the potential for complications in any operation (see advantages & disadvantages). This is especially true in the patient who is particularly overweight and in whom there are comorbid factors such as diabetes, heart disease, etc. The risks are further increased in patients who have had prior abdominal operations and especially, prior attempts at weight reduction surgery. These statements are NOT made to scare you but rather to inform you and your family of the potential risks involved in your decision. Fortunately, the overall incidence of complications and morbidity is quite low for patients in our program. It is our intention to minimize your risk by appropriate and judicious patient screening and referral for preoperative specialist evaluation. Remember the adage, "an ounce of prevention is worth a pound of cure," and accept a referral as being in your best interest.

You should refer to the Informed Consent Sheet for a detailed description of the complications which can occur after weight reduction surgery. It is your responsibility to understand these risks prior to surgery. 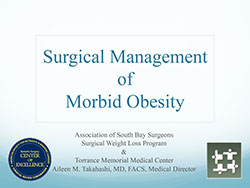